Oh, hi. Yes, I've been really bad at updating this week. Yes, I moved into the seminar houses, got my classes all set up, explored several new cities, and did a ton of exciting things...and never blogged about any of it.
But I was so busy!
I felt like every day, I had to travel to campus and spend pretty much all day there attending various meetings, filling out paperwork and turning it in, meeting people, and registering things, and then when I'd come back, I'd find people to go out to eat with, or would travel with people to the train station to shop or to another city. But now, on Sunday, I finally have a day to just relax and stay in my room as much as I want! So I'm going to do some mega-blogging today. I'm going to separate things into several different posts about different topics. In this post, I'll talk about the seminar houses and my first impressions of KGU in general.
...I actually wrote a really long post very, very late at night a few days ago talking about the checking in process, my first encounters with the other exchange students, going out to eat, etc., but now that I've looked over it, I think it's waaaay too long and detailed, and a shorter post about my impressions of things would be better. I don't want this blog to be a diary where I write about what I did every day, but more of a place for my thoughts and certain observations about living and studying in Japan. So I'm going to keep it simpler.
Anyway.
Last Saturday (the 28th), I moved into Seminar House 2, which is where I'll be staying all of this semester. I have a roommate, Laura, who's from Finland--I've never met a person from Finland before, so it's exciting for me to live with her! She's super nice and has a cool accent. I think it's fun to listen to her talk to her parents and friends on Skype in Finnish.
At first, I thought that the seminar houses were just dorms, and so I called them that--but now, I realize that they're actually different from the dorms at my old school, or from dorms at most schools judging by the other student's thoughts. Some of this may be because of differences in the Japanese way of life, or because of the specific program we're on, or because that's just the way it is.
The biggest thing that I've noticed that's different is that it seems like I'm living in a community rather than just in student housing. Students are always in the lounge, because it's the only place we can watch TV or movies and the only place we can eat besides the kitchen. If we want to eat anything or access our fridge, we have a big kitchen and dining area, which people are always in. I think we're expected to cook our own things (or go out) at night, because it would be too far to go to the dining centers. The kitchen is actually really, really convenient; they supply all of our dishes and cooking supplies, and we all have fridges that we share with a few other rooms (but it's plenty of room for each person's things). Each individual room has their own locker with the dishes, western utensils, and a teapot (I'm so excited that we have a teapot!). There are stoves, broilers, ovens, microwaves, and rice cookers for us. I definitely am going to take advantage of the rice cookers--rice is very inexpensive and obviously can be used for many Japanese dishes. I'm going to try and learn to make onigiri so I can take it to school for lunch sometimes instead of buying lunch every day.
The seminar houses are also very, very nice, or at least much nicer than the dorms I've stayed in before at UNI! We have nice tatami mats on the floor, sliding partitions to separate the desks from the area where we sleep or sit at the table, and a balcony!!! I took a picture of our room (the first time it's been actually somewhat clean and the futons have been rolled up!) 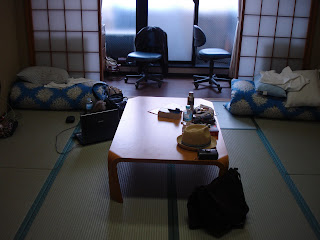 It actually is bigger than it looks in pictures, especially once we put our beds away. This picture was taken standing right inside the door. Behind the screens are our desks, and the sliding door in the back goes out to the balcony. Every night we unroll our futons to sleep, and then we roll them back up and store the bottom mat in the closet in the morning. Something interesting I learned about futons today: we're supposed to put the bottom mat out on the balcony to dry every week or so, because it absorbs so much moisture from our bodies during the night that it can get moldy if just left inside. Weird, huh? I'm not really sure why this happens. Also if we leave our futon unrolled all the time, the tatami mat underneath can get moldy, so that's why we put it away every day. I guess the tatami mats are very expensive and if they get wet at all they may need to be replaced, so that's why we're not allowed to eat in the room.
Here's a pic of Hirakata City from our balcony. You can see mountains in the distance! 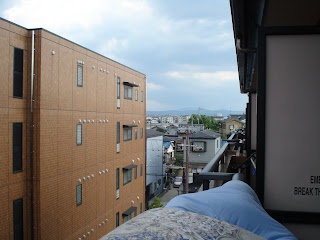 Actually, one thing about Japan that really surprised me is how mountainous it is. Maybe I just didn't pay very much attention in geography class. But you can see mountains on the horizon from pretty much everywhere. One of the reasons why the cities are so compact and populated is because they're all built in the only places that are habitable, and the rest is all too mountainous to build on. I'm not sure if that's the exact reason, but it's what Kayoko told me, and judging by what I've seen I believe it.

As for the Kansai Gaidai campus and facilities themselves, it's all so nice! The campus is very new-looking and easy to navigate. It's certainly smaller than my home university, because it's in the middle of a city, but I was actually surprised at how big it seems when you're actually walking around it. I need to take pictures of campus sometime, but maybe I'll wait until the fall when it's prettier and less hot. The HEAT is insane here--I'm pretty sure I've lost 7 or 8 lbs just from sweating when I'm outside every day. The seminar houses are about a 20 minute walk from campus, but this week I bought a BIKE!!!!, so that cuts the time quite a lot. It's VERY convenient to have a bike in the city, and most seminar house students get one. Mine is light blue and super cute...I'll have to take a picture of it too sometime!
I'm really liking the city of Hirakata, and have started to memorize where different points of interest are and how to get there. There are a lot of little restaurants around the seminar houses and university, and I know where a few grocery and convenience shops are (there are actually a lot of convenience shops, because they are EVERYWHERE in Japan, it seems like.) I've located a sort of department store, Midori, where I can buy pretty much anything I would need, from electronics to groceries to clothes. There are also two cheaper clothing stores pretty much across the street from the seminar houses, so that's very handy (and dangerous for me). If I want to experience more nightlife and shopping opportunities, Hirakata Station is about a 10 minute trip by bus and has a ton of cool shops, restaurants, karaoke bars, arcades, pachinko (a popular gambling game in Japan), and pretty much whatever you could want without journeying into Osaka city or somewhere else bigger. I've noticed that at night, young people like to play music and dance for change around the station, and it really adds to the atmosphere and is just awesome.
I'm really excited for classes to start, mainly because I like having a set schedule and I think that they're going to be really interesting for me. I did take the Japanese placement test, but regardless of if I learned on my own, if I've never taken a Japanese class or had an actual instructor I have to be placed in Level 1--which is fine with me actually, because I know there will be new things I'll be learning and it will be a good review. I've gotten my class schedule all figured out already! The language classes are taught in the morning, so I have Spoken Japanese every day, and Reading and Writing Japanese 3 times a week. The lecture classes are during the afternoon and evening, and I only have mine on Wednesdays and Fridays from 3 to 6:40. The two lecture courses I signed up for are Zen Buddhism, and Popular Culture as Social Practice. Actually, Popular Culture as Social Practice was a 2nd choice for me, and I really wanted to take Onna to Otoko: Gender and Sexuality in Japan, but I guess that class filled up fast. This other class I got sounds very interesting though; it sounds like it deals with the way that media images, popular tv shows, video games, and all that stuff influence Japanese society. Zen Buddhism is also something that I would like to learn about while here, and that I have been interested in but just haven't gotten around to learning a whole lot about before. I heard some things about it, and I guess that there are some field trips and we actually practice meditation and some of the Buddhist rituals in class--so cool!
Well, I'm getting really hungry (all I had for lunch was a few bites of these bad instant noodles earlier--it'll help a lot when I can actually read the labels before buying things). I think I'm going to go to the grocery store and get some things since we finally have full reign of the kitchen, and then I might make another blog about my travels to Tokyo and other places later tonight. Until then!
Posted by Elle at 10:11 AM