Packing and Learning How to Do Woman-Things

I feel like I've finally gotten a lot accomplished today, so I'm gonna make a post about it!
This morning I organized my room (see: looked through stuff, without really moving anything from it's designated spot on my floor) and decided what things I'm going to ship over to KGU before I leave. Originally, I was going to send one big-ish box of clothes and a few dorm-things, but after asking around about shipping rates at the post office the other day I decided to just load up two smaller USPS priority boxes. It might be a little expensive because of the weight, but I was told it'll be less than sending a big box, so I can't complain. And it made me limit myself and really pick-and-choose what to send, which I needed. I had to keep reminding myself that I can still take things in my suitcase, it's not like everything needs to go in the boxes...
I got the boxes all packed and taped up, and am going to send them tomorrow morning hopefully (if I can get the online customs label thing the guy at the PO explained to me figured out...). I ended up getting in a good amount of clothes (you'd be surprised at how much things can compress down!), some jewelry, makeup, picture frames (was going to print out some newer pics to fill them with, but didn't get around to it), some computer things, and a few dorm knick-knacks that I wanted to take to make things a little more homey, I guess. I know that it's probably dumb to take so many clothes since I'm going to inevitably buy more there, but I don't want to spent too much money getting a new wardrobe, and I guess I have kind of an attachment to my clothes :x. I really did pick out only my favorites though. It just happens to be that I have a lot of favorites. :) 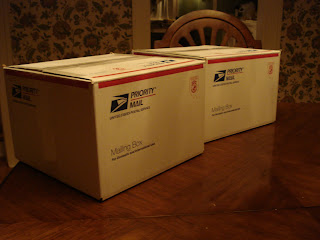 My boxes chillin and waiting to be shipped. See you soon, stuff!
And now on to my big accomplishment of the day: I learned how to cook dinner! (Okay, I learned how to cook a dinner. I know a few more, but they mostly involve tacos or some form of dehydrated noodles or Velveeta cheese.) Anyway, a little backstory. So, when my Japanese friends Hikari and Kayoko have stayed with me, each have made a Japanese meal for our family. Last summer Hikari made Japanese hamburgers and an Okinawan dish that I can't recall the name of (it had potatoes, vegetables, beef, and was flavored with hon-dashi, I believe; she said it's something that girlfriends traditionally make for a new boyfriend to impress them). Over Christmas break Kayoko I think made some type of noodles for everyone, though we made a bunch of different things for ourselves to eat during that time, and I can't quite remember what all we cooked x) (sorry! >.>;;) Anyway, because of that, and because I just think it'd be cool, I decided to learn how to cook some really American dishes so I can make them for Kayoko's family and maybe my home-visit family. I decided on chili and cornbread, since Kayoko and I both really really like them and the ingredients won't be too hard to find (besides the chili powder mix, which I think I'm just going to bring a few packets of over), and apple pie for dessert. And tonight I cooked them for the first time! And took some pictures to document this monumental event.
The chili was actually really easy to make, you pretty much just brown and drain the hamburger and add water and all the vegetables and chili seasoning, and let it simmer. 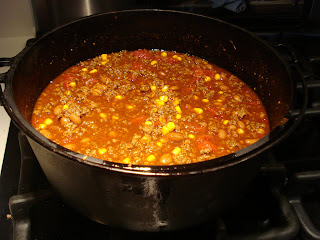 We put corn in our chili to add some more color. And oh yeah, it turns out my camera isn't actually broken--the battery just loses charge super fast and I had to charge it up forever to get it to stay on. :(
The cornbread was more-or-less a success too, though I used a pan that was too big and it ended up being really thin. But it still tasted good! I think cornbread is going to be one of the foods I miss the most in Japan. 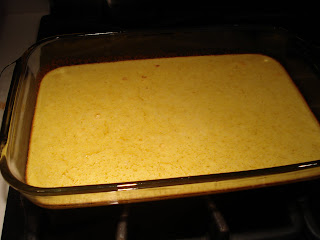 The chili turned out really good--my mom, stepdad, and I ate all of it, with the help of a family friend who stopped in and was peer pressured to eat some too. Then I attempted my first pie, an event which my mom was super psyched about.
We made the pie completely from scratch, and it was very time consuming. I never realized that you had to use one of those dough cutter things to "knead" the crust dough, or why you did before. (For those not up on pie-trivia: it's to mix the shortening and dry ingredients so that the dough is made up of tiny little pieces of shortening covered in the flour/sugar mixture, and not just all mashed together. This is so when it's made into the crust and cooked, the shortening will melt away and leave little layers of crust, which is what makes it flaky.) I won't lie: rolling it nice and thin was a pain in the ass (apparently my dough was very soft, which also meant it would be really flaky and good, but fragile), transferring it into the pan, and later on top of the pie was a pain in the ass, and it was a pain in the ass to peel and slice all those apples. (I'm kind of hoping we can find pre-sliced and skinned cooking apples in Japan. Or I'll just start in like the morning.) Buuut it was worth it; nothing catastrophic happened, and my pie turned out pretty good for my first time! 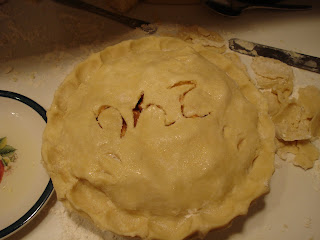 Spoiler Alert: When I cook for Kayoko's family or my host family, I think I want to cut "apple" in hiragana into the top of the pie, so I tested that tonight. It came out okay; I don't know if I'm going to actually do it unless I can come up with a cooler design! 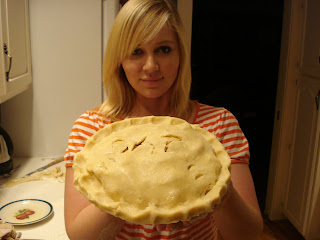 So proud of my ringo pie.
So, I didn't get done with making the dough and the insides and putting it together until like 10:30, so everyone was already in bed by the time I lifted my greatest accomplishment in awhile out of the oven. But I was proud, dammit, I was proud. 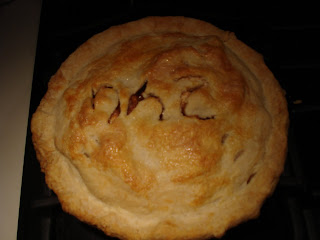 The text's a little warped and I need to work on my outer-edge design skillz, but I would say that's a damn good first attempt.
I didn't really want to just cover my pie up and leave it untouched until morning, and I was really anxious to actually taste it, so I went ahead and cut myself a piece. And it was good! The crust was super flaky (as much as when my mom does it or maybe even more, idk), and it tasted right. The only thing was that the apples weren't mushy enough in the center, so maybe I should have left it in a little longer. I'm going to bake a few more pies I think before I leave (I really want to get it down perfect!), and maybe even venture into the realms of cherry or blueberry. I'm either going to get really good, or way fat trying, or both in the next two weeks.
The only thing that made my cooking lesson better was the news tonight: Yay for California repealing Prop 8! Makes me happy to see us come one step closer to nation-wide equality. :)
Hmm, what else...last night I hung out with my friends Hannah and Clint, and we went down to Scott's man-cave to watch home videos we found, and it was great. Scott was ridiculous when he was little, and I was a mouth-breathing chubster. I'm going to miss hangin wit my homies while I'm in Japan. I'm sure I'll meet new homies, and will have my Japanese friends, but I'll still miss them! Maybe I'll make a post about all the specific things I'll miss about America/where I live soon. Hmm.
Posted by Elle at 11:14 PM